Brownian motion, or Wiener’s process, is a mathematical description of the random motion of a « large » particle immersed in a fluid and not subject to any interaction other than shocks with the « small » molecules of the surrounding fluid.

The result is a highly irregular motion of the large particle, which was first described in 1827 by the botanist Robert Brown by observing particle motions within pollen grains of Clarkia pulchella (a North American wildflower species), and later of various other plants. The most basic physical description of the phenomenon is the following:

This motion allows to successfully describe the thermodynamic behavior of gases (kinetic theory of gases), as well as the diffusion phenomenon. It is also used in financial mathematics models.

The difficulty in modeling Brownian motion lies in the fact that this motion is random and that statistically, the displacement is zero: there is no overall motion, unlike a wind or a current. More precisely:

At a given instant, the vector sum of the velocities of all the particles cancels (there is no ensemble motion),

If we follow a given particle over time, the barycenter of its trajectory is its starting point, it « twirls » around the same point.

It is difficult under these conditions to characterize the motion. The solution was found by Louis Bachelier, and presented in his thesis defended on March 29, 1900. He demonstrated that what characterizes the motion is not the arithmetic mean of the positions <X> but the root mean square V(X^2) 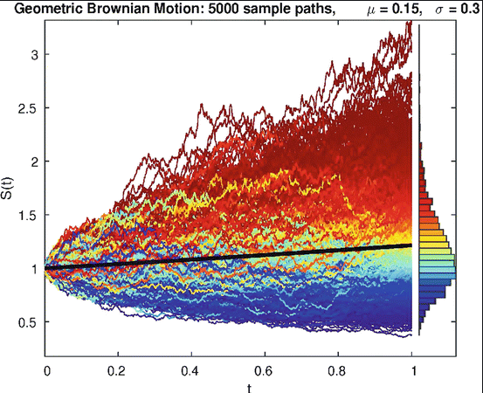