Europe declines again as investors continue to shy away from risk

Like the week, today’s session was volatile, as despite reassuring messages from the U.S. Federal Reserve and the European Central Bank, investors remain concerned about accelerating inflation as well as the pace of economic recovery and the evolution of the pandemic. In the U.S., retail sales climbed 0.6% in June, while economists were expecting a 0.4% decline. In May, retail sales fell by 1.7%, a figure that was revised from -1.3%. The University of Michigan’s consumer confidence index came in at 80.8 in July, the first estimate. Economists were expecting 86.5 after 85.5 in June. U.S. wholesale inventories rose 0.5% in May. Economists were expecting a 0.4% increase after +0.1% in April (revised from -0.2%).

European stock markets ended lower on Friday, with risk aversion once again dominating all markets in the face of multiple sources of concern at the moment. Among the biggest sectoral declines of the day, the Stoxx basic resources index lost 2.93%, the banking index 1.53% and the automotive index 1.27%. In Paris, Société Générale, ArcelorMittal and TechnipFMC lost between 2.46% and 4.68%. Between the market gloom and profit taking, the British Burberry and the Swiss Richemont gave up 4.18% and 2.01% respectively despite good quarterly results. Ericsson fell 9.44% after reporting a lower-than-expected quarterly operating profit with lower activity in mainland China.

Major Asian stock indices moved lower on Friday. Markets reacted to comments from Angela Merkel and the U.S. President at a joint press briefing. The chancellor stressed the need to ensure that China plays by the same rules as the European Union on trade, while Joe Biden said that Washington was prepared to stand up to China as well as any other country. The Bank of Japan decided to keep short-term interest rates unchanged at -0.1 percent. In the long term, the bank will continue to buy government bonds to keep 10-year yields around 0%. The bank will continue quantitative easing with the goal of achieving the 2% price stability target and will continue to expand the monetary base until CPI inflation exceeds 2%. The BoJ board also decided to tackle the climate by applying a 0% interest rate to green loans and bonds.

The oil market is rising slightly but is expected to record its biggest weekly decline since March on the prospect of increased production. 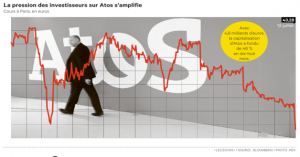 Atos is backing away from a return to growth in 2021. The group warns that its revenues will be flat in 2021, compared to the nearly 4% growth initially expected. The rapid migration of companies to the cloud is penalizing traditional infrastructure activities. After limiting the damage in 2020 thanks to the accelerated digitization of companies, the group was counting on a recovery from the second quarter of 2021. This has not happened. After a decline of 3.9% in the first quarter, « the organic evolution remained negative at about -1.5% due to an acceleration of the decline of traditional infrastructure activities in a context of stronger migration to the cloud post-Covid », explains the IT group, which considers that « this effect will continue in the second half. Paradoxically, the cloud is  one of the growth vectors of the French group, along with cybersecurity, digital and decarbonization. Atos’ entire strategy is to gain momentum in these four business areas. The move is well underway: they accounted for more than half of the group’s revenues in the first quarter, up from 46 percent in 2020 and 40 percent in 2019. However, the more customers migrate to a remote IT infrastructure leasing model (cloud), the more the historical business of management of IT assets in the the more the historical business of managing IT assets in data centers is penalized. The whole challenge is to accelerate, through acquisitions, organic growth in new businesses and a strategic review of legacy businesses that I will detail on July 28. » Despite this assurance, the promise of an improvement in all key financial indicators « as early as 2022 » and the maintenance of the group’s medium-term objectives, the stock market has punished Atos. The stock lost 17% on Monday. Since the beginning of the year, it is down more than 40% – reaching the lowest level since 2014. The capitalization of Atos 5 billion, which will certainly raise the question of its presence in the 5 billion, which will certainly raise the question of its presence in the CAC 40 index.