EuroStoxx Bank Index (SX7E – Bloomberg Ticker) is one of the most traded sectorial index in Europe. Indeed, this particular index is composed of 22 European banks, with revenues and profits made in EUR. 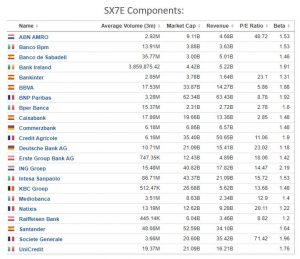 SX7E components are weighted by countries, with Spain and France topping the ranking with 26,9% and 25,4% respectively. The index is computed as follow:

The free float market capitalization is determined by substracting Locked-in shares to  Total Oustanding shares of company and multiplying it by the current share price. To get the total index free float captilization, The divisor is adujsted by any corporate actions on a component (such as split or dividend payment for example). This index offers a great exposure to European financial system and dividends paid by the components. Listed contracts on SX7E dividends are available on European markets.

The SX7E index could be traded through a huge variety of instruments such as Futures, Options, Swaps (TRS), Autocallable structures, etc.