Europe closes in the green, the Stoxx 600 sets a record

At the time of closing in Europe, the main U.S. indices continue to move higher, driven by technology stocks. In the United States, the IHS Markit manufacturing survey released on Friday showed an unprecedented level of PMI at 63.1, while the services PMI fell to 59.8. As we approach mid-session, supported by better-than-expected results from such iconic tech companies as Snapchat (+20% at around 5pm) or Twitter (+2.7%). As in the previous quarter, Intel reported better-than-expected results, but revenues from its highly profitable data center chips continue to decline. As a result, the share of the world’s number one semiconductor company lost 5.54% to 52.86 dollars.

The rise in European equity markets continued on Friday.  Already reassured by the ECB’s very accommodating tone yesterday, investors were able to get some reassurances on the solidity of the economic recovery in the euro zone, where private sector activity is at its highest since 2000. In France, the IHS Markit flash PMI for the manufacturing sector came in at 58.1 in July, compared with a consensus of 58.4 in June. An equivalent situation is visible in Germany. At the same time, corporate results also helped to support the morale of operators. Activity rebounded more strongly than expected in the first half for Thales. Valeo generated a net profit of 90 million euros in the first half of the year, compared with a loss of 1.21 billion euros a year earlier. For Dassault Aviation the net margin was 5.6%, compared to 2.1% a year earlier.

Asia’s major stock indices were down on Friday as investors remained concerned about the resurgence of the coronavirus epidemic around the world. Japanese markets are closed for a public holiday. In South Korea, health officials revealed that the government plans to reimpose its level 4 containment measures in the Seoul area to contain the spread of the disease, due to a spike in daily infections seen in the country recently. Chinese Foreign Ministry spokesman Zhao Lijian on Friday dismissed what he called the U.S.’s « zero mentality » as going against China’s development and « the fundamental interests of the two peoples or the trend of the times, » adding to the uncertainty around trade between the two countries. At the stock level, TATA lost 1.85% at 6:45 am.

The price of wood is booming

IPOs at their highest level in for twenty years

The stock market is once again a dream for entrepreneurs. After several years of erosion of the stock market, which culminated in the shock of the health crisis, initial public offerings (IPOs) have picked up again. They have even followed one another at a crazy pace since the beginning of the year. No less than 1,070 companies made their first steps on the financial markets during the first half of the year worldwide, according to a study by EY. They raised $222 billion from investors. In both cases, these are record figures for at least 20 years. The Asian stock exchanges have concentrated more than a third of the IPOs in terms of amounts raised, behind the Americas, and nearly half of the operations in volume in the world, ahead of Europe and the Middle East. The biggest IPO of the year was held in Hong Kong: TikTok’s Chinese competitor, Kuaishou Technology, raised 6.2 billion in February. Private equity companies accounted for 14% of equity companies accounted for 14% of IPOs in the first half of the year worldwide, but but accounted for more than half of the half of the amounts raised in the United States United States and 40% in Europe. 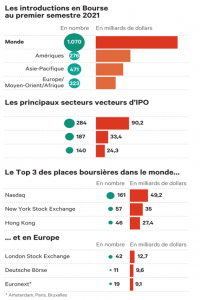