Based in Montreuil, Ubisoft Entertainement develops and distributes interactive video gaming software for game consoles,
computers and mobile devices. It owns a catalogue of popular franchises, AAA games: Assasin’s Creed Series, Far Cry Series,
R6 Siege, The Division 2. During FY2020 UBI sales decreased €1.5 Bn, following the underperformance of both Tom Clancy’s Franchise games: Ghost Recon Breakpoint and the Division 2, throughout the fiscal year. In addition, with the covid-19 striking a higher level of uncertainty, some of its Triple A games might expect delay: Assassin’s Creed Valhalla, Watch Dog Legion, Far Cry 6 and set to be released during FY2021-22, as linked to the transition on working from home had short term impacts on production (few weeks). In Feb 2020, accounting for FY2021, UBI acquired 75% of Kolibiri Games, German developer of “hyper casual” games (mobile). A way develops its expertise in this type of game for smartphones devices, following the acquisition of Green Panda Games in 2019, specialized in F2P mobile games, another idle games developer. 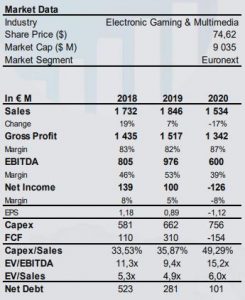 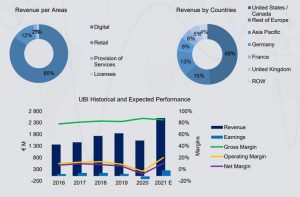 With FY2020 being a disapointing year for the firm, UBI reported revenue up 18% in its Q1-20 quarterly earnings. Indeed, sales of €427.3 M (vs €363.4 M prior year) mainly driven by its top franchise production. Games such as R6 Siege (+30% sales increase y/y) and Assassin’s Creed (+60% sales increase y/y) with new opus set to be release at the end of the year (Assasin’s Creed Valhalla) revived the “hype” for this series among players for its previous games (particularly Assasin’s Creed Odyssey and Origins), adding with the release of next-gens consoles both Sony’s PlayStation 5 and Microsoft’s Xbox Series X expected this November / December 2020. Also with quarantine and social distancing measures applied by several governments worldwide, has boosted the sales of video games, increasing the number of players over the quarter. As an example the overall US video gaming (in addition to in-game micro-transactions) industry recorded over $10 Bn in sales. This momentum will pursue over the next quarter with revenue expected for Half year 2021 to €700 M (over €2.4 Bn for FY2021), and the increase in both operating and net margin, pushed by the release of triple A games.

With net debt decreasing (to $101 M), the focus is put on improving the core business onto higher margins franchises as well as long-term investments with acquisition, the development of esports and virtual reality :
The strengthening of its mobile games portfolio via several acquisitions of idle game developer / studio to gain expertise in the industry: Kolibiri Games (2020), and Green Panda Games (2019). The development of a collegiate R6 Siege esports league (North American and European league), with several partners and sponsors : FACEIT (North American Esports platform), Corsair (Computer hardware) and Origin PC. A league launched in July 2020 with over $30,000 guaranteed in cash prize.

SHARE PRICE – Since January 2020, the stock gained 20%. The share price (23/09/2020) closed at €74.62 per share. pushed by strong results and higher demand for video gaming given the market conditions following the next months with the release of top franchises games. This strategy focusing on both focusing on higher margins franchises, and F2P mobile games will pursue its momentum and expect to grow at 60% to reach over €2.5 Bn in net sales and 20% in operating margin (to €500 M) for FY 2021, an all-time record since its founding. As such, shares that will likely exceed the €100 per share. 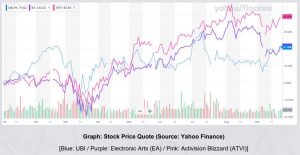