The U.S government treasuries have been quite stable for some time now after having gone through a rollercoaster earlier in the year. As the economy starts to recover, although slower than expected and anticipated, the fixed income market steadies down and clears out for investors.

As the economic indicators start showing signs of recovery and lead their way to pre-pandemic levels, the U.S government treasury notes and bonds reach their lowest levels. Did investors turn a blind eye to inflation? or are they now convinced it is transitory as the federal
reserve says?

The U.S benchmark, the 10-year Government treasury note reached its lowest levels of 1.198% before jumping back again to 1.219% as investors embrace themselves for the upcoming economic data. Fixed income market yields move opposite to prices.

Even the 2-year treasury note, that are of the shorter maturity ticked higher as investors anticipate the economic indicators. It reached 0.207% after being at the low of 0.182%. The longer maturity 30-year government treasury was almost stable at 1.86%. 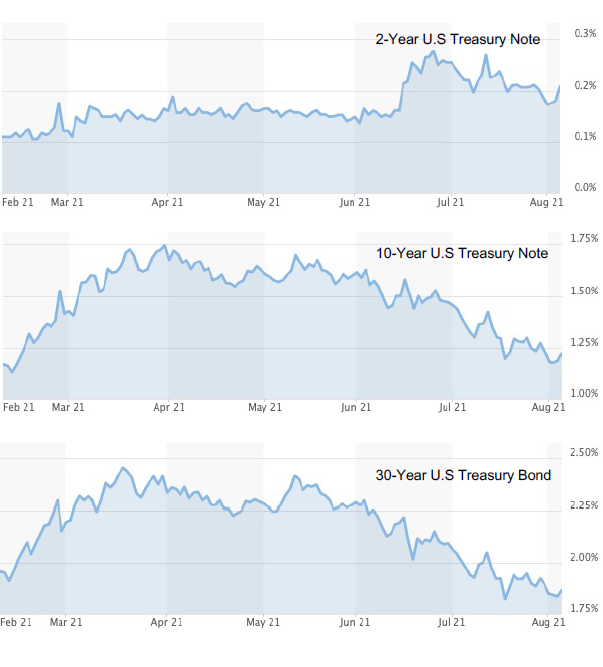 Why is that happening?

Although the new Delta Covid-19 variant is posing threat on the economic recovery trajectory, economic data are showing signs of relief and recovery, although slow, but on the way.

The treasury fixed income yields were mixed as economic data came in mixed as well. Yields decreased as July private sector payrolls came in weaker than they were expected. They then rose again after the service sector activity readings came in stronger than anticipated from the Institution of Supply Management.

What also affected this volatility in the U.S Government debt yield was the Federal Reserve Vice Chairman Richard Clarida’s comments on the bond purchasing program and the trajectory of interest rates. He said that until the economy reaches the pre-pandemic unemployment rates and the inflation hovers around 2%, interest rates will remain low. He expects that interest rates will start rising beginning 2023. The bond purchasing program will be discussed the Federal Reserves upcoming meetings.

The Treasury department also announced that the size of its nominal note and bond auctions will remain steady. It however expects to reduce its auction size.

Investors are still anticipating what the post Pandemic economy and the Covid-19 aftermath on the markets. This has never the less kept them coming back to the fixed income market as a refuge from the high risk stock market as well as the cryptocurrency market.

The upcoming Federal Reserve meetings are expected to conclude authorities decision of the Bond purchasing program that was commenced beginning of the pandemic to weather its effects.

The decision is set to be the making or breaking of the fixed income market. As well as the decision on the interest rate hike. Inflation concerns were successfully turned down by the Federal Reserve and investors, at least most of the, are starting to agree with the fed that it is Transitory.

Future economic data will either decrease interest rates or increase them. investors, analysts and everyone for that matter awaits them.