Belgian colony from 1908 to 1960, The DRC is a very large country of 2.345 million Km² (4 times France) with 9 borders. The country is strategically located in the center of the African continent and is considered as a “real geological scandal” given the vast amount of raw materials it abounds :
• 10% of world copper reserves with very high grades
• 50% of world cobalt reserves would be buried in the Congolese subsoil 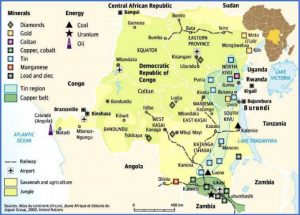 However, the Congolese economy faces many political troubles, is very dependent on the evolution of the prices of raw materials and suffers from a severe lack of infrastructure (roads, bridges, airports, railways), but doesn’t have the immediate funding means to implement them.
A structural transformation of the economy has been done in order to develop the tertiary sector :
• While it employs only 10.6% of the working population, the Secondary Sector dominates the economy with 44.1% of value added in 2019.
• The Tertiary Sector employs 21% of the working population and contributes to 34.1% in the breakdown of GDP.
• Though it only represents 19.1% of the GDP, the Primary Sector still concentrates 68.5% of the working population against.

With more than 90 million inhabitants, the 4th most populous country in Africa, DRC is the continent’s 12th richest country with a GDP of USD 48 Billion. As the 8th poorest country in the world, the DRC has not met any of its millennium goals except
a slight improve of its poverty rate from 71.4% in 2005 to 63.4% in 2012. Although the government is taking steps to improve the business climate, it remains very difficult, especially with a significant pressure from the tax administration and an unstable
judicial institution. Besides, despite the high number of young workers, it is often difficult to find highly qualified technical resources in the country.

On a Demographic point on view, DRC is made-up of 250 ethnic group with a majority of Bantous. 70% the population is Christian (50% catholic and 20% evangelical), 10% is Muslim, and 20% has traditional beliefs. 43% of households have access to drinking water and only 20% have access to sanitation. Population density is 37 inhabitants per km² with life expectancy at birth of 59 years (SSA average is 60.5 years). On a Political point on view, the DRC has just experienced a smooth political transition with the election of President Tshisekedi. The long political crisis from 2016/18 has weakened many regions (Kasi, Goma, Bukavu…) and some are still affected by the Ebola virus. On an Economical point of view, in 2015, the Congolese economy was hit by the drop in the prices of raw materials, deteriorating its balance of payments. In order to finance the deficit, the Central bank decided to put more money in the economy : it resulted in a skyrocketed inflation of +54.7% year on year end of 2017.
Since 2018, the economic situation stabilized under the effect of the strong rise in prices and exported volumes of cobalt and copper. The current balance showed a slight surplus at the end of the year and the exchange rate of Congolese Franc to dollar also stabilized after a -40% devaluation in 2017; inflation fell to +7% year on year. Nevertheless, the country benefits from a low public debt compared to the rest of the African countries : less than 18% of GDP. Copper and Cobalt represent 90% of exports and 45% of tax revenues are again trending down at the end of 2018 because of a huge fall in raw material prices. 40% of its exports go to China, making the Congolese economy very dependent on both Commodity cycle and Chinese
demand.

Allied with a total dependence on commodity prices, the DRC suffers from an insufficient mobilization of tax revenues :
• The budget only represents 7% of GDP against 19% on average for Sub-Saharan Africa, tax collection has declined steadily (13% in 2015, 9.7% in 2016, 8.2% in 2017)
• The need to reduce the share of the Informal sector which represents 85% of employment by broadening the tax base.
The Mining sector is dominant : 12 copper producers providing 80% of production, most of whom are Chinese groups and 6 Cobalt producers proving 80% of production. Artisanal mining only represents 15% to 20% of total production and is poorly regulated and has drained a lot of controversy, especially with forced child labor. As shown below in the graph representing the structure of DRC’s exports in % of total exports, we can notice the huge part of mining products in the country’s exports (99% in 2019).

Agricultural export productions (cotton, coffee, cocoa, sugar, tea and rubber) are declining, food crops (cassava, maize, rice…) do not even meet local demand and imported corn is the main consumption expense. The insufficient Electricity production (only 2,500 MV) remains a brake for the economic development of the country : only 9% of the Congolese population has access to electricity. A very ambitious project (Inga III) supposed to produce 4,800 MV is under study. The Industrial sector is experiencing a huge crisis : traditional industries productions (food, cement, chemicals factories) have suffered from the depressed economic situation in 2015 : fall in public spending, loss of household purchasing, and currency devaluations complicate cross-border trade.
National currency : the national currency is the Congolese Franc (CDF) freely convertible into the currencies in the domestic market depending on the currency supply to date. The CDF is thus not convertible externally, but companies have the possibility of opening accounts in USD and Euro : the Congolese economy is very heavily dollarized. Find on the right the evolution of CDF for USD 1 : CDF 1,961 for USD 1 / CDF 2,329 for Euro 1. The Banking sector is affected by a lack of long-term stable resources, only donors or private investors provide funding, in particular to invest and develop the mining sector.

Central bank
The key rate is maintained at 18.5% following the resume of activities post Covid-19 restrictions. The coefficients of the mandatory reserve for sight and term currency deposits are respectively at 13% and 12% and those applied to national sight and term currency deposits are at 0.0%. Smoothing of current fluctuations in liquidity will be done with periodic auctions of the Congolese Central Bank’s (BCC) Bonds. Find below the evolution of BCC’s outstanding Bonds in Billions of CDF, it reached a low level of CDF 11 Billions on September 11th 2020 : 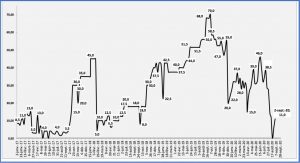 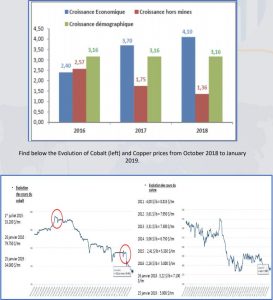