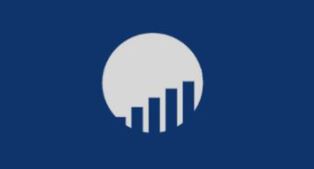 Chevron is a US based company, founded in 1879 where it was formally known as Pacific Coast Oil Co. It was then acquired by Standard Oil of California in 1906, until 1984, where the company had officially changed its name to Chevron Corporation. The current CEO of Chevron is Michael Wirth.

The company specializes in the production of crude oil and natural gas, along with the manufacturing of transportation fuels, lubricants, petrochemicals and additives. Chevron is also orienting its focus towards a lower carbon future with the involvement of renewables and cost efficiency.

In the year 2020, it recorded 3.08 million barrels of daily production in net oil, while holding 11 billion barrels of net oil for reserves. It also reported to hold $239 billion in total assets and $94.5 billion in sales and other operating revenues. Unfortunately, this represented a fall of 32% for the company’s total revenues. The main explanation for this fall is the lack of activity that occurred in 2020 due to the COVID 19 pandemic. To limit this fall, a reduction in expenditures were carried out with -$20.5 billion in capital and exploratory expenditures and -$2 billion reduction in operating expenses.

The most significant areas that Chevron operates in are North America, South East Asia and Australia.

Overall, the company is the second largest oil company after Exxon Mobil. Indeed, in 2021, Chevron had was ranked 27th in the Fortune 500 companies with a market valuation of $190 billion. 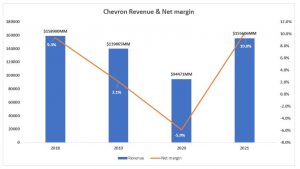 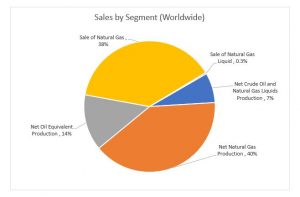 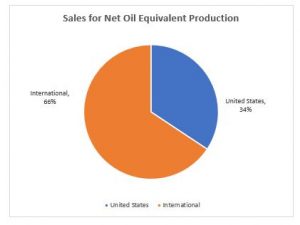 The Renewable energy group is a US based company. It originally began in 1996 as the biodiesel division of West Central Cooperative. In 2006, the company was separated from West Central and relocated its headquarters from Iowa to Ames.

In regard to performance, RGB recorded quite a strong sales growth of 30% compounded annual growth rate from 2010 to 2019, along with 19% ROIC over the trailing 12 months and a historically adjusted EBITDA Margin of 7 to 16%. 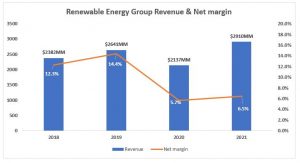 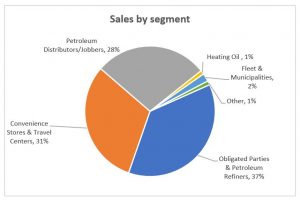 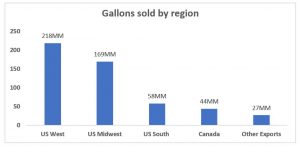 The valuation method used is a multiples valuation approach. The 20 companies chosen were based on the sector of “Oil and Gas Refining & Marketing Industry” with the geographical location in the United States of America. The companies 20 were narrowed down into four companies based on similar market caps, sector & services.

Based on the valuation, the average enterprise value is $1.5 billion. The result shows an undervaluation of the company. A likely reason may be due to the multiples chosen for its comparable companies, which had a lower multiple forecast overall compared to the consensus of Renewable Energy Group (with EV/EBITDA multiples ranging from 7x to 9x).

Additionally, according to Market Screener, Renewable Energy Group demonstrates a buy from outperformance, with a target price that has an average upside of 73%. This may indeed highlight another reason as to why the actual valuation is of $3 billion compared to the publication.

As the data and choice of comparable companies were chosen based on available public websites,  they may not serve as an accurate representation of the specific valuation that has been done for this publication. Although, the overvaluation of Renewable Energy Group may not be true, it is still worth considering with other consensus in order to compare whether the following companies are indeed its competitors.

As of today, it has been announced that Chevron has accepted the deal and will acquire Renewable Energy Group.