Inflationary pressures remain high in the US

The New York Stock Exchange is down on Thursday, penalized by financial stocks, which are suffering from the continued decline in bond yields in the wake of Federal Reserve Chairman Jerome Powell’s statements to Congress on the temporary nature of inflation and the need for continued monetary support for the economy.

On the stock side, insurance and health services group UnitedHealth rose 0.5% after again raising its profit targets for 2021 at its quarterly trading update. Morgan Stanley also rose after reporting a 10% increase in net profit to $3.5bn in the second quarter, beating analysts’ average estimate.

Nestlé’s baby food brand Gerber is making a commitment to carbon neutrality. The brand is committed to achieving carbon neutrality for all its baby food in the US by 2035. To achieve this, Gerber plans to develop sustainable practices in several priority areas such as regenerative agriculture, manufacturing and supply chain management, recipe design, packaging and investing in high quality offset projects.

The French competition authority has given its « unconditional » approval to the takeover by Bordeaux businessman Michel Ohayon, via his FIB fund, of the Go Sport chain for a symbolic 1 euro, according to a statement on Thursday.

The World Bank on Thursday cut its growth forecast for the East Asia-Pacific region in 2021, excluding China, as many countries in the region face rising coronavirus cases, new and more contagious variants and vaccine supply constraints. Including China, whose GDP is expected to grow by 8.5% in 2021 according to the World Bank, the region is expected to grow by 7.7% this year, up from the previously announced 7.4%, said David Malpass, the World Bank’s president.

After an increase of 12 tonnes in May, the Brazilian Central Bank continues its yellow metal purchases. In June, it increased its reserves by 1.3 million ounces, or 41 tonnes for about 2 billion dollars. The country has thus increased its holdings to 121 tonnes, reaching 31st place in the ranking.

Singapore: one of the world’s largest floating solar power plants

Singapore on Wednesday unveiled one of the world’s largest floating solar power plants, covering an area equivalent to 45 football fields, in a move aimed at reducing the city-state’s greenhouse gas emissions. A total of 122,000 solar panels have been installed on the Tengeh reservoir. They are intended to generate the electricity needed by Singapore’s five water treatment plants. In February, the Singaporean government unveiled a « Green Plan » which includes planting trees, reducing the amount of waste sent to landfill sites and increasing the number of charging points for electric cars. 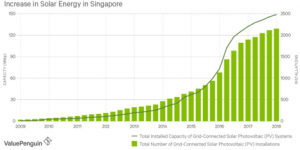