For the first time in history, on Monday, April 20, 2020, the May 20 future contract on the American oil WTI enters in a negative territory and even reached -$40, never seen before in history. This has several explanations, and we will try to be as accurate as possible in the analysis of the different factors. First of all, despite the economic slowdown, oil production was in full swing and record productions were still being recorded. The United States produced more than thirteen million barrels daily, Saudi Arabia about twelve million and Russia more than ten million. The economic war between these countries was due to the fact that an OPEC+ agreement proposed by Saudi Arabia to reduce production in order to maintain prices during the pandemic had not been agreed with Russia. Therefore, they decided to flood the market with black gold in order to recall the strength
they could have on it. At the same time, consumers needed much less oil because of the reasons previously mentioned, related to Covid-19. It is very surprising to see a physical and therefore tangible material, being able to reach negative prices; even if the negative territory was already known in finance with interest rates. This can be explained by the limited storage capacity, which leads to an increase in conservation costs by the law of supply and demand. Brent has resisted this fall much better than its American counterpart WTI because its storage is much less centralized. All American oil is piped to the city of Cushing, Oklahoma, where storage capacity is limited. We can see in the following graph the exponential growth of storage levels in this city compared to normal activity, which has contributed to maintaining fear among investors. The danger for American oil is that it is very difficult if not impossible to stop the production of a well at a reasonable cost. 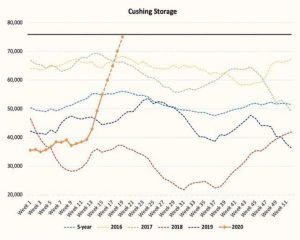 Concerning the Brent, which is exploited in the North Sea, the barrels are directly loaded onto boats. The companies are freer geographically regarding storage and it is therefore much cheaper.
The sharp drop in price can be explained by the fact that the May 2020 contract expired the day after the Krash, April 21, 2020. It should be noted that at the expiry of a future contract, the last holder is delivered the equivalent in physics.
The closer the expiry date gets, the more pressure speculators will have to get rid of these contracts towards players who, in turn, want delivery of the finished product. Bloomberg explains, for example, that the American fund United States Oil (USO), responsible for an ETF on WTI, held 25% of the May 2020 contracts and got rid of them in order to roll over the June
2020 position.
All these elements explain the historic fall of oil in April 2020 despite a « historic » agreement by exporting countries to reduce production for May 2020.
Since that day, which will remain engraved in the annals, the WTI market has returned to a more « normal » course thanks to the gradual recovery of the economy and the price is today (in the begining of January 2021) around $50 per barrel; but the players now know that it is possible that the price of black gold may return to negative territory in the event of another big exogenous shock.