Milton Friedman’s views of the Consumption Function And the Permanent Income Hypothesis !

The Consumption function is one of the key concepts of Keynesian economics. However, Milton FRIEDMAN critics the shape of the Keynesian function considering the Disposable Income (current income) is not only the unique determinants of consumption. Under M.Friedman’s views the Consumption is conditional to Time as it is determined by current income AND Expected Income in the futures ! This is so Permanent Income Hypothesis (abb PIH). Consequently, the Consumption varies not because the current Income changes but because the Permanent Income fluctuates! Thanks to the PIH, M.Friedman predicted the Consumption Smoothing effect by highlighting that people spread out their Consumption over lifetimes as their also spread out Income changes over time in order to have a stable consumption level across time ! The Permanent Income is so defined as an Expected average Income in Long-term including financial asset, property assets, and also ‘’human capital’’ as education and experiences. The term Permanent Income reflect the agent’s abilities to earn Income in the futures as they realize an estimation of their Income across their lifetime (necessarily anticipated also). 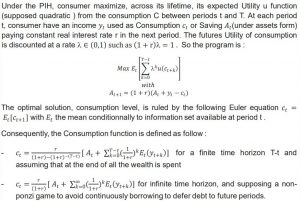