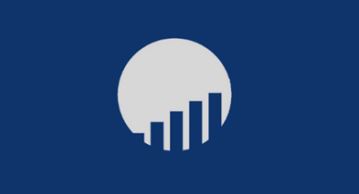 M&A in the Infrastructure Services Sector

Brief Introduction
Infrastructure is the set of fundamental facilities and systems serving a country, city, or other area, including the services and facilities necessary for its economy to function. Infrastructure is composed of public and private physical structures such as roads, railways, bridges, tunnels, water supply, sewers, electrical grids, and telecommunications. Inside the investment funds, the industry is usually split to the following teams: Transportation, ESG (Environment, Society & Governance), Utility, Metals & Mining, Renewables, Telecom (Sometimes in TMT), or the firm will be categorized by geography, like in North America, Africa,
EMEA, APAC etc.

Top 7 Major Players in the market by Market Size: (As of August 2020)
No.1 Union Pacific Corporation, with a market cap of 130.05 Billion USD, it is USA based Transportation Company and ships anything like food, forest products, automobiles, agricultural products, coal and chemicals mainly on Trains (Rails) and even if there is no Train Route they will use road network and rail network to transport goods on time. They have 37,483 employees
as on 2019. Last reported annual revenue is 21.71 billion USD.

No.3 AMERICAN TOWER CORPORATION (REIT), with the market cap of 110.60 Billion USD, it is Wireless and Broadcast Communication Services Provider and Infrastructure company with headquarters in USA. As on 2019, they have 5,454 employees. Last reported annual revenue is 7.58 billion USD.

No.4 VINCI, with the market cap of 53.21 Billion USD, it is Construction and Infrastructure Facilities constructing company with headquarters in France. As on 2019, they do have 222,397 employees and 48.9 Billion EUR revenues per year. Last reported annual revenue is 48.95 billion EUR.

No.5 CROWN CASTLE INTERNATIONAL CORPORATION, with a market cap of 68.48 Billion USD. It is Real Estate Investment Company Possess unique network of communications infrastructure—towers, small cells, and fiber. They all work together to set the stage for new innovation and they bring the world’s biggest ideas and possibilities to people and businesses
who need them. Last reported annual revenue is 5763 million USD.

No.6 TC ENERGY CORPORATION, with a market cap of 46.89 Billion USD, its business involves supply of natural gas and crude oil through pipelines and generates electricity. Headquarters in Calgary, Canada. The last reported annual revenue is 13.25 Billion CAD.

No.7 KINDER MORGAN, with a market cap of 31.94 Billion USD, is Oil and Gas pipelines infrastructure operating company with headquarters in USA. Kinder Morgan is one of the largest energy infrastructure companies in North America. We own an interest in or operate approximately 84,000 miles of pipelines and 157 terminals. The last reported annual revenue is
13,209 Million USD. 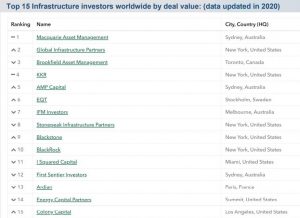 Among all the investors in 2018, Macquarie raised a total capital of $60.77bn, following by GIP ($57.42bn) and Brookfield($38.69bn) whereas the fourth manager KKR, only raised $20.19bn, the top 3 giant players have successfully made the huge gap between themselves and their other competitors. This picture would looks more vibrant in terms of the total value :

The investment Logic behind :
There are several investment strategies inside this industry, for example, the assets could be called either in core or non-core, with the following of Core-plus, value-added, opportunistic or infrastructure debt.
Core Assets :
An asset-backed investment in a developed market with low demand risk, often a long-term revenue stream, and typically underpinned by economic regulation. Core infrastructure covers network assets, including water, electricity and gas transmission and distribution, regulated airports and rail networks.
Non-core Assets :
Core+ : An investment that bears some market risk but has features that limit risk. For instance, long-term contracts, barriers to entry for competitors, and a long-term price support scheme from governments. Typical examples of Core+ include renewable energy assets and non regulated airports.
Core++ Assets : Similar to Core+ assets but with a higher associated degree of market risk. Core++ includes essential services provided on a fully-marketed and competitive basis, with higher-margin volatility. For instance, this may include car parks, motorway service areas and ports. This category may also contain core assets in emerging markets that may not have the same level of maturity and track record in maintaining a system of economic regulation. In European area, the calls for non-core assets are gradually rising since 2012, Changes in the energy sector have been one of the biggest drivers of growth in new non-core investments. The common seen deals are involved inside the following sub-sectors: Oil majors, Smart metering business, Telecoms & modile towers, Rolling stock companies etc.
Most Recent Deals :
BlackRock bought New Green Power for $238 million in Sep 2020 In Sep 2020, BlackRock Real Assets bought New Green Power, a Taiwanese Solar Power Developer for the value of 238 million USD, the former has agreed to acquire a majority equity
interest in the latter, though both parties declined to disclose the details of the deal’s structure, but it’s estimated to be around 70% stake in NGP for NT 6.8 billion ( $237.6 million). This deal would become the 3rd investment in Taiwanese renewables, following the acquisition of 28 solar projects totalling 70 MW in capacity from J&V Energy in 2018, and 14 solar projects
totalling of 115MW capacity from NGP and J&V Energy in 2019. BlackRock has appealed that this M&A deal will be made through a private fund named Global Renewable Power Ⅲ, this fund held a first close on $1 billion in Dec 2019.

Trends: The infrastructure Set to tempt more investors in 2020 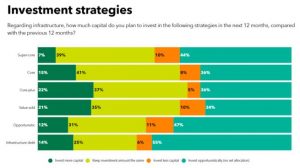 From the above questionnaire, we could see that most of the investors still hold positive attitude with the acquisition of this industry, nearly 35-40% of investors wish to remain the same strategies compared with last year, in Core-plus and value-added part, they even wish to invest more capital. 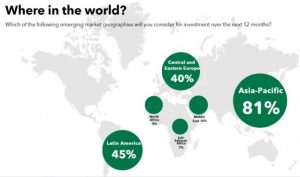 For the emerging market that alongside, APAC is the most favored emerging market for LPs, with the followed by Latin America and CEE with the interested rate of 45% and 40%, North Africa, Middle East and Sub-saharan Africa are showed less than 10% of interests. 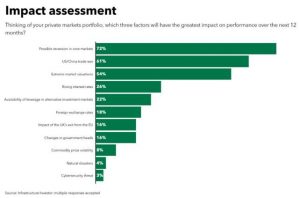 Due to the nature of this industry, the infrastructure LPs always conduct recession scenario tests as part of due diligence to ensure the investment can withstand the negative scenarios and would be expected to generate the appropriate return, from the outlook in the beginning of 2020, the recession in the core market, US/China trade war and extreme market valuations are
the top 3 concerns from the perspective of the investors, however, the future cannot be estimated properly, obviously, the Covid-19 has become the most serious concern above them all.