The New York Stock Exchange began a formal decline on Tuesday morning in a market that was largely cautious ahead of a particularly busy earnings calendar. The technology index suffered in particular from the decline of more than 1% in Apple shares, before the publication in the evening of the quarterly results of the manufacturer of iPad, iPhone and iMac. The wait for the end of the Fed meeting, which starts today but will not end until tomorrow, also seems to be limiting movements on Wall Street. Analysts are expecting strong releases from the tech giants in the coming weeks, good news that could lift hi-tech stocks by more than 10% by the end of the year. Tesla is down more than 2% after doing better than expected in the second quarter, on the back of record demand. GE is up 0.8% after reporting strong quarterly results and raising its annual targets.

Analysts say fears of further travel restrictions in major consumer countries in response to the spread of the Delta variant of the coronavirus are limiting the rise in oil prices. The United States on Monday maintained restrictions on international travel, despite requests for reciprocity from the European Union.

As the Fed meeting approaches, investors are playing it safe and looking to government bonds, with yields falling: the 10-year Treasury yield is down two basis points to 1.2611%, as is its German equivalent, at -0.431%. 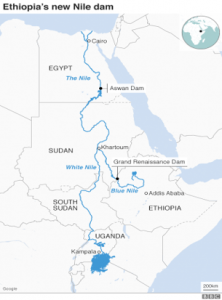 Ethiopia has reached the end of the second phase of filling its controversial mega-dam on the Nile. The dam, which is supposed to be Africa’s largest hydroelectric facility when completed, has been the source of a diplomatic row between Ethiopia and the downstream countries of Egypt and Sudan. Discussions under the aegis of the African Union (AU) have not allowed the three countries to reach a tripartite agreement on the filling of the dam and the modalities of operation of the water reservoirs. In July 2020, Ethiopia announced that it had met its target of storing 4.9 billion cubic metres of water and planned a second phase of 13.5 billion cubic metres. There is now enough water to put the first two turbines of the dam into operation, the Ethiopian official told AFP, without giving a precise date for the start of electricity production. According to a 2018 World Bank report, « about 70% of the Ethiopian population lives without electricity ».