CAC 40 spent half the week in the red

Markets in the Americas are mostly mixed at Mid-Day. In Wall Street, the three main indexes are all red. After disappointing US retail sales, housing data were released for July. Building permits are up and beat analysts’ expectations. Meanwhile, housing starts retreated by 7% compared to previous figure, slightly below forecasts. Oil inventories are lower, according to EIA and API. NASDAQ 100 and S&P 500 decline by 0.18% and 0.19% at Mid-Day. Investors are waiting for FOMC meeting minutes. Fed’s Bullard (Saint Louis) wishes for rate hike and lower tapering for 2022. Yesterday, Jerome Powell highlighted digital currency was becoming “more and more important”. Regarding the battle against covid-19, the US will offer booster shots, starting on September 2021.

The overall performance of European markets is divided today. CAC 40 is down 1.83% since last Friday, finishing in the red for the 3rd time a row at 6,770.11 points. Luxury sector deeply decreases today. Heavyweight LVMH, Hermès, Kering and L’Oréal lay at the bottom of the index and respectively dive by 5.16%, 3.76%, 3.55% and 1.72% today. On the other hand, Engie, Veolia and Vinci top the index. German DAX climb by 0.28% and is a few points away from its all-time high. German automakers don’t head in the same direction. Daimler, Volkswagen and BMW lose 1.21%, 1.12% and 0.70% at closing bell. Globally, investors favored healthcare and utilities stocks. In the Eurozone, inflation in July (YoY) slightly rose and matched analysts’ forecast.

Focus on the funding of Chinese start-ups

The Renminbi remains the first currency for start-up funding in China. The semiconductor industry shows a stronger preference for local currency while other industries let more space to US Dollar. 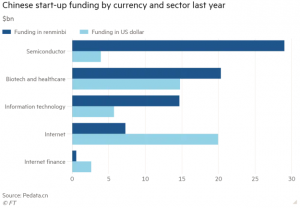