General presentation of the economy in Belgium

Being the first european country to undergo an industrial revolution in the 19th century, Belgium has devoleped an excellent transport network. This highly developed infrastructure allows Belgium to integrate its industry with that of its neighbours thanks to its numerous ports, canals and railways. Industry is concentrated mainly in the populous Flanders in the north,
around Brussels and in the two biggest Walloon cities, Liège and Charleroi, along the sillon industriel. Belgium has few natural resources other than fertile soils. Nonetheless, most traditional industrial sectors are represented in the economy, including steel, textiles, refining, chemicals, food processing, pharmaceuticals, automobiles, electronics, and machinery fabrication. Despite the heavy industrial component, services account for 74.9% of GDP, while agriculture accounts for only 1% of
GDP. The Gross Domestic Product (GDP) in Belgium was worth 529.61 billion US dollars in 2019, according to official data from the World Bank and projections from Trading Economics. The GDP value of Belgium represents 0.44 percent of the world economy. 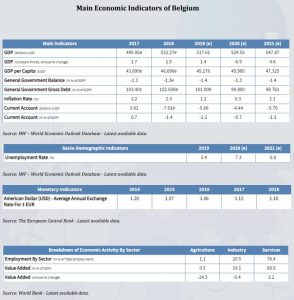 Current Economic Consequences from the Covid 19 Pancemic and Future Perspectives of the Country :

Belgium benefits from a strategic geographical position: situated between the UK, Germany and France, Europe’s three main economies. Growth is driven by investment and household demand, but the recent weakness in private consumption, despite
continued employment growth supported by labour tax cuts, has caused a slight drop of the economic growth to 1.4% in 2019. According to the updated IMF forecasts from 14th April 2020, due to the outbreak of the COVID-19, GDP growth is expected to fall to -6.9% in 2020 and pick up to 4.6% in 2021, subject to the post-pandemic global economic recovery.
According to IMF data, public debt represented 101% of GDP in 2019 and should continue to reduce slightly in the coming years (99.8% in 2020 and 98.8% in 2021). Government deficit is estimated at -1.4% of GDP in 2019, and is likely to remain stable in the coming years. Fiscal policy is projected to loosen in 2020-21, which will suport growth in the current slowdown. Inflation rate fell from 2.3% to an estimated 1.2% in 2019 (IMF), mainly because of the fall in energy prices. Unemployment rate continued its downward trend in 2019 to 5.4%, against 6% in 2018. But unfortunately, the IMF expects the unemployment rate to be affected by the negative economic impact of the COVID-19 pandemic, the rate being currently estimated to increase to 7.3% in 2020 and decrease slightly to 6.8% in 2021. Another important risk is linked to a further slowdown in the euro area and uncertainty related to Brexit, which could adversely affect economic activity, notably in Flanders, which has a close trade relationship with the United Kingdom.