Us major stocks are moving upwards this Monday, with the S&P 500 gainning 0.99% and hitting new record highs. Indexes are being pushed by a better-than-expected data on existing home sales in the country rsinig 2% month on month in July  reported the National Association of Realtors (NAR). On the business front, Pfizer took 3.9% after the U.S. Food and Drug Administration gave full approval to the COVID-19 vaccine made by it and German partner BioNTech for use in people over the age of 16.

European markets closed mostly green today after their sharpest decline since February and despite worse-than-expected economic data. The Flash Eurozone PMI Composite Output Index fell to 59.5, while Flash Services PMI Activity Index slid to 59.7. The Flash Manufacturing PMI Output Index dropped to 59.2 and Flash Manufacturing PMI to 61.5. Oil producers rose on a swing higher in oil prices, and luxury-goods retailers recovered some recent. Luxury-goods makers Kering 2.96% and LVMH Moet Hennessy  2.68% both advanced while BP 2.48%, Royal Dutch Shell 2.14% and Total Energies 1.69% were all beneficiaries of the 5% rise in crude-oil prices.

Asia-Pacific region closed mostly up leading by a surge of 1.78% of the Nikkei 225 after positive manufacturing data from Japan. Meanwhile, the ASX 200 took 0.39% after the Australian prime minister declared over the weekend that the country “can’t live with lockdowns forever” even if he stated that the coronavirus will likely continue to circulate once the government relaxes restriction measures. Hong Kong’s Hang Seng Index rose 1.05%. China’s Shanghai Composite inched up 1.45% and the Shenzhen Component slid 1.40%. China looks set to continue its regulatory tightening across sectors, with investors monitoring the impact on shares in Chinese and Hong Kong shares which lost more than $560 billion in the previous week alone. 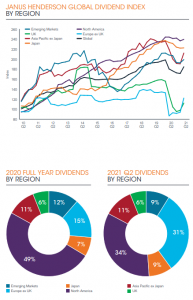 The company Janus Henderson Investors has released its Global Dividend Index saying that, globally, dividends jumped by 26.3%, year-over-year on a headline basis, recovering to $471.7 billion, only 6.8% below their Q2 2019 level. Dividends paid to investors are projected to hit $1.39 trillion in 2021, reflecting a recovery that’s stronger than expected.
Payouts in the U.K. surged 60.9%, and in Europe climbed 66.4%, while most of the dividend cuts were in emerging markets, the report said, reflecting the delayed impact from lower reported 2020 profits. North America, meanwhile, saw record dividends in the second quarter, driven by Canada. However, payouts in the region had largely held up through 2020, meaning there was little rebound effect.